Learn about simple circuits and make your own light up headband. This project uses sewable components and conductive thread to make a headband that lights up when the buttons are snapped together.  The sewable components are wearable e-textiles, they have large sew tabs to allow them to be sewn into fabric. Various input, output, power and sensor boards are available. They’re even washable (with special care)!

KEEP BATTERIES OUT OF REACH OF CHILDREN 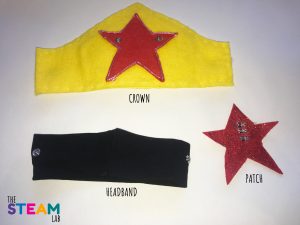 The thread is made from stainless steel which allows it to conduct electricity, the metal button snaps are also conductive so when the patch is snapped in place the circuit is completed and the lights light up. The lights are sewn on in a parallel circuit as the resistance of the LED is too great (the lights wont light up) if you try and connect them in series.

You can make a variety of different light up patches to connect to your headband just make sure the button snaps are the same distance apart!